The search for easter eggs WHAT IS THE DIFFERRENCE BETWEEN EASTER AND PASSOVER – SHOULD CHRISTIANS CELEBRATE EASTER OR PASSOVER?

If you asked people what their thoughts were surrounding the two words PASSOVER and EASTER, you would probably get a response like “Passover is Jewish and Easter is Christian.”  You might also get that Easter is chocolate eggs and bunnies. 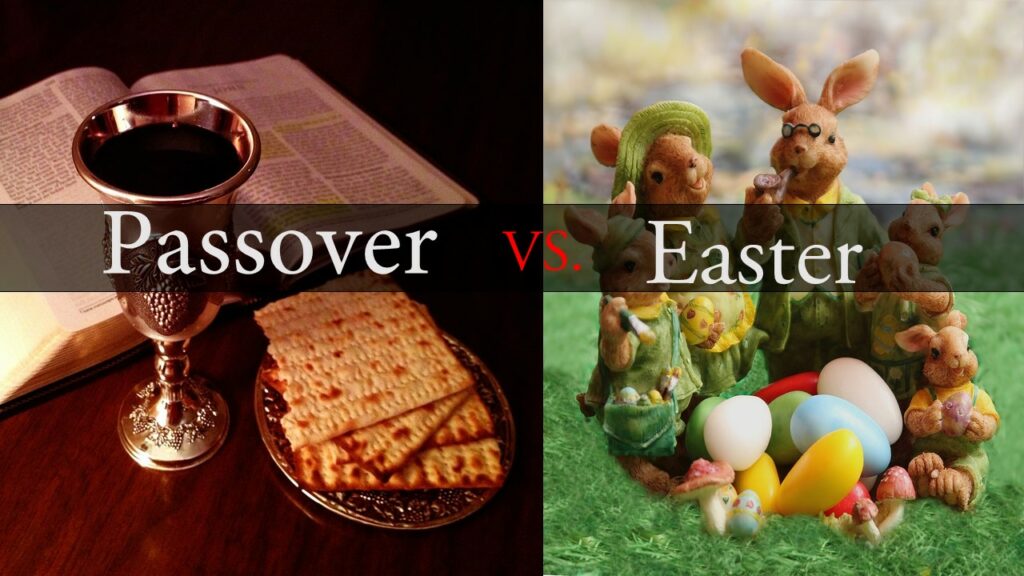 Would this basic answer be correct? NO

There is a big difference between Passover and Easter, but you may be surprised to learn that it isn’t Jewish versus Christian.

What does the Bible say about Passover and Easter

The origin of Passover is found in Exodus 12. The Israelites had been under slavery to the Egyptian Pharaoh, who had refused to let them go – and because of Pharaoh’s stubbornness, God sent a series of plagues on Egypt and was about to send the 10th and final plague, killing the firstborn of all people and animals. God would spare or “pass over” only those who painted lamb’s blood on their doorway (Exodus 12:12-13) 12“For I will go through the land of Egypt on that night and strike down every firstborn, both men and animals, and I will execute judgments against all the gods of Egypt. I am Adonai. 13The blood will be a sign for you on the houses where you are. When I see the blood, I will pass over you. So there will be no plague among you to destroy you when I strike the land of Egypt.

Leviticus 23:4-5 – “4These are the appointed feasts of Adonai, holy convocations which you are to proclaim in their appointed season.5During the first month, on the fourteenth day of the month in the evening, is Adonai’s Passover.”

What about Easter? You can’t find Easter commanded in the Bible. The word is actually found in Acts 12:4 in the 1611 King James Version, but most scholars recognise it as a clear translation error (modern translations replace it with the word Passover). There are over 70 references to Passover in the Old and New Testaments—but no legitimate references to Easter.

Symbols of Passover are full of meaning. Yeshua Himself is “our Passover” and “sacrificed for us” (1 Corinthians 5:7). The unleavened bread represents His sinless and broken body (Matthew 26:26), and the wine represents His blood that was poured out for us (Matthew 26:28). The foot washing represents the humility and serving attitude of Yeshua, which we are to emulate (John 13:5-8, 9-11, 12-15).

The main symbols associated with, and surrounding Easter are eggs and bunnies. But these have deep roots in ancient pagan practices. The search for eggs and bunnies have nothing to do with the bible or any commandment of God. In fact, the origin of this tradition, comes from the ancient pagan festival of Eostre, which honoured the goddess of fertility and spring. The goddess’s animal was a rabbit, which have long traditionally stood for fertility due to their high reproduction rates. Even the name Easter has origins in an ancient pagan goddess.

You need to ask yourself, every year the Christian world celebrates Easter, and though Christmas has more publicity and commercialism, technically Easter Sunday is considered the most important day of the Christian calendar. But what about the customs surrounding this holiday? Bunnies that lay eggs, coloured eggs, Easter egg hunts and sunrise services on Easter morning?  I personally have never seen a bunny lay an egg. What do any of these have to do with the resurrection of the Saviour of mankind? In fact, none of these traditions that surround Easter – including the word Easter itself – have anything to do with the Bible. We need to base our worship around what is said in the Bible and not from a ruling that a council of bishops led by the pagan Emperor Constantine had to say.

One of the major differences between Passover and Easter is this: The Creator God commanded Passover to be kept by His people. He never commanded anyone to observe Easter to commemorate Christ’s resurrection. Yeshua Hammasiach was ordained as the Passover Lamb that would be sacrificed to make freedom from the penalty of sin possible (John 1:29). The Passover of Exodus 12 pointed forward to Christ’s sacrifice 1,500 years later! Just as the Israelites were saved from death by the lamb’s blood, we can be saved from eternal death by Christ’s blood.

Easter claims to celebrate Christ’s resurrection. If you are a Christian who loves Yeshua Hammasiach and highly values what He did on our behalf, you should ask yourself, does it show love and respect for Yeshua to associate ancient pagan fertility symbols (rabbits) with His resurrection?

So, was replacing Passover with Easter wrong?  YES most definitely.

Nowhere in the Bible does God give us the right to not keep His holy days and replace them with days of our own invention. Easter was an invention of man that became formalized as a “Christian” day of worship with bunnies that lay eggs. Lets keep our focus on keeping the Feasts as instructed by God and laid down in the Bible.  See the teaching on our site of Unlocking God’s Blessings Through His Feasts  – Passover / Unleavened Bread / First Fruits / Shavuot / Feast of Trumpets / Yom Kippur / Feast of Tabernacles