CAN WITCHCRAFT AFFECT CHILDREN OF GOD?

What is witchcraft? Witchcraft is the use of magic spells, supernatural powers to control people or events, or harm others. Witchcraft is used by people in the occult and certain cultures. When witchcraft is practiced they assign demons and give them mandates to kill or destroy in the spirit realm. 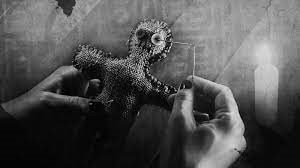 18 saying, thus says Adonai Elohim, ‘Oy to the women who sew magic charms on all their wrists and make veils of every size for their heads in order to ensnare souls! You hunt down the souls of My people, but preserve yourselves. 19 You have profaned Me among My people for handfuls of barley and crumbs of bread, to kill those who should not die and to save those who should not live, by lying to My people, who listen to lies.’”  20 Therefore thus says Adonai Elohim, “Behold, I am against your magic charms with which you hunt people like birds. I will tear them from your arms. I will deliver the people you hunt like birds.

According to Ephesians 6, our fight is not against flesh and blood but against rulers of darkness. This means that none of us is exempt from these attacks from the enemy, but God does equip us with weapons and knowledge to fight these attacks and to win the battle. Our enemy the devil hates Yeshua Hammasiach and because of our union with Him, satan hates us as well. It stands to reason that each of us who are children of God is a target of spiritual forces set against Christ and the forward advance of the Kingdom of God. We don’t all get spiritually attacked to the same degree. Those servant leaders that function as ligaments will receive more of the enemy’s attacks. The enemy seeks to find ways to hinder the work of godly leadership as they equip and teach the body of Christ and help children of God to grow.

Various forms are used to do witchcraft. The satanists or witchdoctors collect DNA, hair, nails, body parts, bones, beads, organs, herbs, etc. – they then command what the assignment is and plant it on the grounds of the person who is being attacked. Voodoo dolls can also be used to curse a person which is a form of witchcraft, evil signs such as a pentagram can also be drawn on the property of the persons who is being attacked. A blood sacrifice can be done by killing an animal on the property of the person that is receiving the curse. When this is done, a bloodstain will remain on the property. Wooden statues and carvings can be cursed after witchcraft has been initiated on it.

Christian Witchcraft is also very popular among children of God. Gossiping and speaking out curses against another person, even amongst believers, initiates demons with assignments to destroy the person who the gossip was about, as well as the person who initiated the gossip.

The person who is being attacked will experience a ray of misfortunes such as illness, death, disability, deformities, accidents, theft, bareness in women, impotence in men, lack promotion, lack of success, failure in relationships and financial ruin.

You need to receive deliverance from the curse or witchcraft that was carried out or spoken over you. Let a qualified pastor who has the knowledge on the spirit realm, pray and break the curses off you. In some cases prophetic actions must be used to break these curses. When items were planted you will need the guidance of Holy Spirit to show you where these planted curses are – remove them, burn them and cancel them with Holy Communion (grape juice declared as the Blood of the Lamb). When a blood sacrifice has been done on the property it will not help to wash it off with water, as in the spirit the assignment of destruction is still standing – it needs to be cancelled with the Blood of the Lamb (communion grape juice).

When a witchcraft curse has been broken, it is a spiritual law that it is automatically returned to the sender. In many cases the sender of the curse will then receive the same misfortunes of illness or destruction. This is just a small portion of the subject we touched on, however, for more information contact the office to book your place at the “From Curse to Blessing” course.